‘Aww, You Shouldn’t Have…’: Why Giving a Gift to a Referral Source Might be a Bad Idea 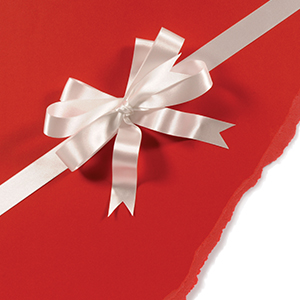 Federal laws that regulate the relationship between clinician and referral source

Physical therapists in private practice have always been challenged by the need to generate new referrals and new
referral sources to maintain their space in the market to not only keep the doors open, but to maintain a steady, and
hopefully increasing supply of patients in a competitive market.

With the COVID-19 pandemic still affecting the way people throughout the United States interact with healthcare
providers and receive healthcare services, competition for referrals will continue to stress practice owners.1 This
struggle to survive will lead to creative methods of marketing and business generation, and historically, has often
included some form of gift or enticement. However, there are now federal laws which regulate marketing and the use of
gifts or enticements as a way to generate referrals. Consequently, a practice owner must do their due diligence and take
the reasonable and necessary steps to ensure that that the strategies used to generate referrals are legal.

The Anti-Kickback Statute (AKS), found at 42 U.S.C. § 1320a-7b(b), is a law which regulates the method, manner, and type
of gift or enticement, commonly referred to as “remuneration,” exchanged between a practice and a referral source.

Examples of remuneration include cash, gift cards, golf outings, dinner, or rent below fair market value. Under the AKS,
it is illegal to induce referrals, through the giving of any “remuneration,” for physical therapy services covered by
any federal health program (e.g., Medicare or Medicaid). For example, a physical therapist is not allowed to pay a
doctor a $20.00 referral fee per referral or enter into a lease agreement with a physician practice for double the fair
market value of that space. A violation of the AKS can result in both civil and criminal penalties, including but not
limited to fines, prohibition from participation in federal health programs (i.e., Medicare, Medicaid), and even
incarceration. To be found in violation of the AKS, the intent of the remuneration must be to generate referrals.

However, there are “safe harbors” built within the AKS which allows certain marketing or relationships to occur without
violating the AKS so long as the criteria for each specific safe harbor is met.

The Stark law, also known as the Physician Self-Referral Law, is found at 42 U.S.C. § 1395nn. Stark is similar to the
AKS, in that it prohibits physicians from referring patients for “designated health services” (e.g., physical therapy)
to an entity with which the physician has a prior financial relationship that does not fit within an “exception” to the
law’s provisions. The “exceptions” to Stark are similar to the “safe harbors” of the AKS. There are differences between
the AKS and Stark. First, Stark is a civil law only, meaning that violations of this law are not accompanied by the
possibility of criminal penalties. Second, intent is not a factor with a Stark analysis, so if the relationship violates
the language of Stark, then the physical therapist can be liable whether or not they intended to generate referrals. In
addition, under Stark, one cannot bill for services provided to a patient referred to the practice through an improper
relationship. If the relationship between a physical therapist and a referral source violates Stark, the Federal
government may seek a refund of any payment for those physical therapy services.

The Federal government is actively enforcing the AKS and Stark and will not hesitate to levy civil and criminal
penalties, when appropriate. Oftentimes, violations of the AKS and Stark will coincide with violations of the False
Claims Act (FCA), 31 U.S.C. § 3729 et seq., which imposes liability on any person who submits a claim to the federal
government that he or she knows (or should know) is false. Billing for services not provided is a clear-cut example of
an FCA violation. Submitting claims for reimbursement for services provided under an arrangement which is in violation
of the AKS or Stark could also lead to violations of the FCA. Under the FCA, improper billing or any overpayment must be
repaid within 60 days of discovery. A claim can be brought forward by a private party (i.e., whistleblower) who can
share in the proceeds of any action or settlement.

There are numerous examples of physical therapists and other healthcare professionals running afoul of these laws and
being prosecuted. A quick online search for Antikickback, Stark, and False Claims reveals multiple instances of
practitioners incurring significant monetary fines and even incarceration3. For example, in October 2008, the United
States Attorney’s Office in Baltimore, Maryland, announced a settlement reached between an orthopedic surgery practice
(Orthopedics) and a physical therapy practice (PTP) over allegations of multiple violations of the AKS, Stark, and FCA.

It was alleged that Orthopedics and PTP had entered into a business agreement wherein Orthopedics would refer patients
to PTP for physical therapy services. For each patient referred, a referral fee was paid. Meanwhile, PTP had entered
into a lease with Orthopedics for office space at a price which was much higher than fair market value. It was alleged
that these arrangements violated the AKS and Stark. Furthermore, it was claimed that the FCA had been violated because
PTP had billed for physical therapy services while knowing they were based on an improper financial arrangement and had
even “double billed” by submitting multiple claims to Medicare for the same service. The two practices reached a
settlement with the Federal Government, with Orthopedics paying a $158,312.47 fine and PTP paying a $80,000 fine.4

More recently, on March 22, 2022, the Department of Justice (DOJ) announced that ten Texas physicians settled claims
that they had received illegal financial kickbacks for referrals made to a hospital and two laboratories for laboratory
tests. It was alleged that the illegal kickbacks were disguised as investment returns paid to the doctors from their
investment into various Management Service Organizations (MSO). The fines ranged from $24,850 to $454,088. In addition,
in order to resolve the claims against them, the physicians agreed to cooperate with the DOJ’s investigation and
litigation against the other entities involved in the scam.2

When setting up a private practice, a physical therapist should think long and hard about how to ensure their marketing
plan is compliant with federal regulations.

Spend the money to retain a healthcare business/compliance attorney to assist with contracts, marketing, and compliance.
Familiarize yourself with the AKS, Stark, and FCA.

Have clear, written guidelines in place for all marketing efforts. Keep marketing materials standard to help avoid a
staff member from “going rogue,” potentially exposing the practice to liability.

Limit the value of any thank you, birthday, holiday, or other celebratory or appreciation gift to as little as possible
(i.e., approximately $10.00).

When entering any sort of relationship with a potential referral source (e.g., physician) practice due diligence to
ensure that this relationship does not violate the AKS or Stark.

The intent of this article is not to provide legal advice and is certainly not to scare you away from being aggressive
in marketing your services to potential referral sources. The goal is to make you aware of these Federal regulations,
the potential consequences for ignoring them, and the need to manage this risk and ensure compliance with these laws.
While generating new referral sources is required to sustain and succeed in a private practice, doing so by using
impermissible gifts in violation of Federal law might mean that the failure of the practice becomes the least of the
owner’s concerns. 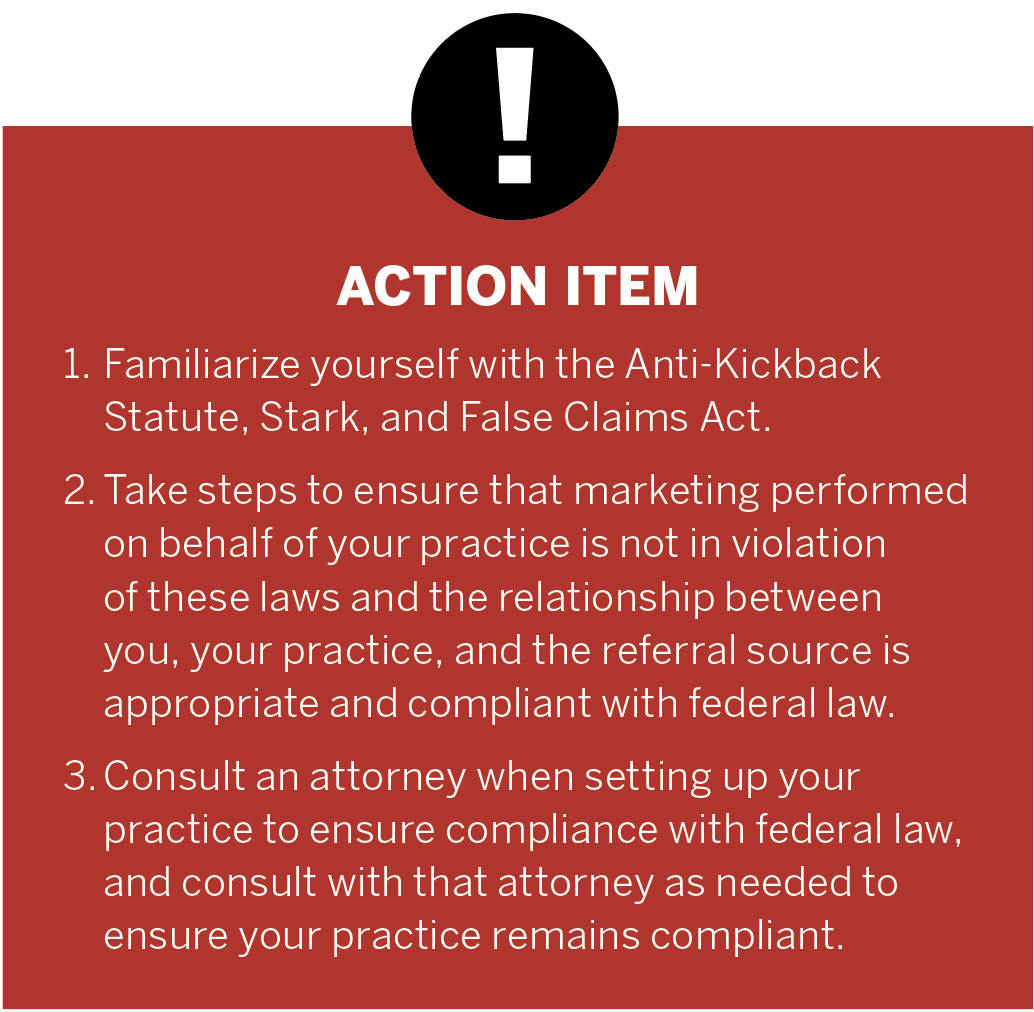 2This is not an exhaustive list of the criteria for this safe harbor or instructions on how to satisfy these criteria,
and the reader is encouraged to seek legal guidance if considering a free/discounted transportation program for their
practice.

3Other examples of healthcare providers either settling, or being criminally and/or civilly punished, for violating the
AKS, Stark, and/or the FCA can be found at the website of the United States Department of Justice at justice.gov.

4For more information on the Orthopedics and PTP fines, visit https://bit.ly/3CttBdg.

Jason W. Bialker, Esq, was a licensed physical therapist for nine years prior to practicing law. Currently, he is a
Shareholder at Marshall Dennehey in Philadelphia, PA, and his practice includes the defense of physical therapists and
other healthcare providers in medical malpractice litigation and disciplinary actions. He can be reached at
jwbialker@mdwcg.com.