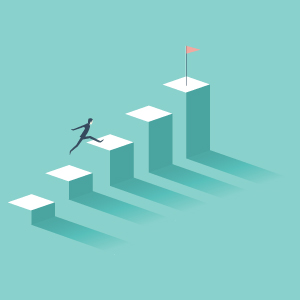 As organizations grow, leadership becomes a core business component that needs to be considered.

For a time, a single physical therapy clinic can grow fairly well under the care of one intentional and dedicated leader. However, often that leader finds himself or herself insufficiently equipped to lead a team through challenges or even healthy growth.

It has been said that the only cap on an organization’s growth is its leadership. For most, leadership is an abstract subject. So how do you implement a process that equips emerging leaders and trains them in the art and science of leadership? We felt that our leadership training program had to be systematic and consistent. Although outside leadership training is helpful, for this to have long-term effect, we felt that it needed to be brought into the organization’s internal systems in a repeatable fashion. It needed to be part of how we operate each and every month.

We chose to use John Maxwell’s “5 Levels of Leadership” model.

One of the strengths of this model is that it takes the abstract concept of leadership and translates it into 5 well-defined levels. The goal for the individual who wishes to reach their leadership potential is to become excellent at as many of these levels as are relevant for that individual in their role.

This concept allowed us to move away from the idea that someone is a “good” or “bad” leader. Instead, we were able to start identifying the level of leadership that they are at in a quantifiable, measurable manner. From that point, we were able to help them to grow to the next level. In addition, this mindset allowed us to assess how those under the leader were performing.

Here is a brief overview of the 5 levels. For the purposes of this illustration, I will designate “you” as the leader and “Josh” as the person you are leading.

At this level Josh is aware that you are his leader, and he acknowledges you as his leader in the organization. For example, Josh may be a new technician and you hired him. Josh reports to you. Josh follows you because he has to.

At this level, Josh has started to like and respect you. You have developed a relationship with Josh and have shown interest in his life. He is allowing you to guide him and help him grow. Josh follows you because he wants to, thus giving you “permission.”

Now Josh is performing well. He is meeting almost all of your expectations in his role, and he is occasionally going above and beyond. Josh is following you because he sees and values what you have done for the organization.

Josh has now taken on more responsibility. You are leading Josh well to make a significant impact. Josh now leads people who report to him. Josh is following you because of what you have done for him.

Now that you have an awareness of the 5 Levels of Leadership, how do you make it into a system in your organization that consistently helps the company’s level of leadership improve?

We have incorporated it into our staff development program, which contains the following elements:

We hold a 30–60 minute, one-on-one meeting with all of our full-time employees twice a year. We review their strengths, their values, their goals, and a lot of other things related to their performance and the company’s performance. We call that meeting a staff development meeting because it is all framed around helping our staff improve, and we tie that improvement to financial compensation.

From these meetings we develop a six-month plan for that employee. Then we meet with each of these employees once a month and review the progress they and we are making in that plan.

For every employee who has someone reporting to them, in the staff development meeting we list the people who report to them.

Let’s take Sue as a clinic director, for example. She may have a receptionist (Jenny) and an assistant clinic director (John) reporting to her. We ask Sue where she feels she is as a leader with each of the staff that she is leading. So we ascribe a number (1–5) to each of her direct reports.

Next we review in slightly greater depth what are the characteristics of those levels of leadership. We ask Sue where she wants to be as a leader with each of her direct reports (1–5) in the next six months and then we ask her what she is going to do to become that level leader.

Here’s an example. Sue may report that she feels she is just at Level 1 with Jenny (receptionist) as Jenny just started work last week. Jenny understands that Sue is her supervisor.

It is logical for Sue to feel that she would like to be a Level 2 leader with Jenny in 30 to 60 days. So how is she going to get there? She will invest time in getting to know Jenny. She will show interest in Jenny’s well-being and look for ways that she can help Jenny. If all goes well, in 30 to 60 days Jenny will be liking and trusting Sue and will feel that she wants Sue to help her to grow. At that point, Sue has become a Level 2 leader with Jenny.

Now, how about John, the assistant clinic director? Well, John has a great relationship with Sue, he trusts her, and he knows that she has his best interests at heart. He’s been there for about a year and enjoys working with Sue.

But John is a little late getting his notes done. He is in charge of clinic cleanliness and Sue frequently finds excessive dust and toilets not being cleaned as often as they should be. So where does Sue feel that she is as a leader with John? Probably a 2. They have a great relationship and John likes taking guidance from Sue, but he just isn’t meeting all the expectations.

So we will write in Sue’s development plan that she wants to become a Level 2 leader with Jenny and a Level 3 leader with John. We will also write down what Sue plans on doing to achieve those levels.

Each month we review with Sue how she is progressing in each of these items. Then in six months we will make a new plan to reflect her leadership status at that time.

The key principles in all this are that:

Matt Slimming, PT, DPT, is a PPS member and founder and owner of STAR Physical Therapy and STAR Fitness, an eight-clinic physical therapy practice in the Greater New Orleans area. He can be reached at matt@starptclinics.com.