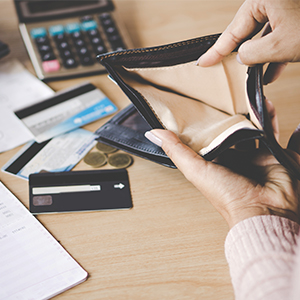 Overcoming and Learning From Financial Challenges in PT Private Practice

“Watch Your Money!” I still recall those wise words loud and clear when I asked a patient if he had any advice for me starting out in business.

The elderly patient who spoke them suffered a serious stroke, complete with expressive aphasia, however his message was direct and I understood him with no difficulties. What made this advice even more valuable was the fact that this patient was an auto mechanic with over 40 years of experience in owning and operating his own automotive business. Like any seasoned veteran in business, he had his share of nightmarish stories that made you lie awake at night. Many of those stories were centered around his money woes either created by customers, regulatory changes, economic recessions, or by his own ignorance and errors. The advice was sage, but even though I was warned, I still encountered money woes of my own through my two decades of owning a physical therapy private practice. Whether it’s physical therapy services or automotive repair, the principles and general business cycles are the same. The following are a few examples of my own money woes in business, how I overcame them, and what I learned and implemented as financial policy afterward.

When I started my practice, I was keenly aware of costs and being frugal. I was raised to be frugal and not spend more than needed. That advice is important and, in the right context, appropriate, but only once business production (quantity) has been established. I had some idea about keeping track of the number of daily visits, but beyond that simple metric, we did not really track anything else. This lack of true analytical tracking, created a false sense of security, based on how busy it “felt.” If we saw 30 patients in one week and it felt “busy,” and we received some checks in the mail and could pay our bills that week, we believed we were doing well. Unfortunately, seven months into my first year in business, our volume of patients had declined by nearly 50%. However, we felt no distress because the money kept coming in, so we felt like we were doing fine. Just a short month to two later, our cash flow had dried up as the past patients had been paid upon, and we were now starting to get paid on the 50% below-average patient volume weeks. There were three of us employed: an occupational therapist, a receptionist, and myself, for whom I had to cover payroll and expenses, and we were rapidly running out of money. I delayed paying a loan payment and began setting up meetings with physicians to try and “shake the trees” to get some new patients in the door. That reallocation of money toward physician marketing not only worked attracting new patients, but our volume grew and cash flow boomed, all the while our expenses never changed. So, cutting costs and watching expenses had no leverage on business success. My number one priority shifted from watching expenses to growing and maintaining production volume to generate cash flow.

INVEST YOUR BUDGETS – DON’T MANAGE THEM

Business mirrors life in that no matter the size and scope of a business, it will cycle through a normal sinus rhythm of peaks and valleys, growth and decline. Those who proactively take correct actions will raise the peaks and make the valleys shallower. I have always tended to be more offensive and assertive until I got into business.

My limited knowledge forced me into pre-determined thoughts about money and I began to resort to defensive measures by limiting risk, costs, or challenges and accentuating safety and security. As previously mentioned, I learned that production quantity must come first in business development. My tendencies are the “go big or go home” attitude, so everything I did as a business owner was geared around business expansion and growth entirely. As you would imagine, because of my newfound knowledge in business about growth being important, I started allocating as much money as possible to growth centers, hiring as many personnel as possible and re-allocating as much money toward marketing as possible. This short-sighted business principle worked but only to get us off the ground and growing. It struggled after our second expansion and failed miserably after our third expansion. I took my eyes off our cash position and began only looking at singular production metrics to guide the business.

Unfortunately, my controller came to me right after another one of my mass hirings where I hired four therapists in one week, only as a precursor to growth, and she showed me how much cash I was burning through! We were doing more business than we had ever done but making less money than we ever had. These paradoxical metrics are not terribly uncommon in business; however, ours were radically contraindicated and were putting the company on life support. If I continued with my “business genius” moves, I would eventually bankrupt us.

I realized that I lacked the true knowledge of how to manage the finances beyond running them like a checkbook. I created several reports and began to analyze on Quickbooks. I started outlining and sorting all of our expenses yearly and monthly, and even down to weekly. I took the comparisons and created ratios against our revenue. It was at that moment that I realized I was propping up the growth of the company by trying to spend my way into profitability, which doesn’t work. Our ratios of individual productivity did not scale correctly, and instead by more hiring, each employee did a little less after each person was added. I re-created budgets and spending plans based on correct evidence-based productivity metrics for therapists, front desk personnel, marketing, billing and collections, and overall profitability.

Then I had a choice: cut staff or push individual productivity up to match the company growth we were seeking. I chose the latter because I wasn’t going to terminate anyone because of my failure. However, I wasn’t going to let any staff members cruise by comfortably anymore, either. Eighty percent of our total operating costs reside within 20% of our total operating expense categories: labor and marketing. So, I broke down each of those categories and put every employee on a spreadsheet with their costs and benefits and compared against the value they create. I then did the same thing with marketing category. Once I was finished, I put in a strategic plan to repair the broken ratios that allowed more money, energy, effort, and time to be spent on the areas and people who were the difference makers.

I created performance reviews and a salary tool based upon quotas. Reviews went from one time annually to every month. Staff were made aware of what their weekly quotas needed to average in order to receive a healthy raise. That eliminated the well-paid comfortable staff from relaxing while the lower paid staff pushed harder and created more of a balance, yet still held up principles of teamwork and productivity.

Next, I analyzed the marketing budget. Everything going forward was “accountability based” and “return on investment” modeled. I streamlined our budgets, slashed spending in areas that were returning too little and reinvested money into the correct people on our team, slowed down the rate of increases to those paid more, and reallocated money into marketing activities that were returning us new business. I began this strategic plan process after our third expansion and within 4-5 months of implementation we were net profitable and had a growing cash position again.

Today, we use this same model in our budgeting and planning processes. This tool has become invaluable to predict profitability and forecast cash flow. We also use this “pay it forward” process of investment to coach, teach, and mentor our new hires, and to coach and develop our lower performers and demonstrate how they can better themselves.

PUT IT INTO PRACTICE

Most money woes in private practice can be lessened with focus on quantity—growing top-line revenues, maintaining patient volume, and capturing as much charge per session as possible—and quality—by keeping balanced investments of operating costs. If you invest your money into building your quantity while maintaining, or even improving your quality, you’ll be happy with the results.

Steve Line, PT, is the President of Columbus Physical Therapy, P.C. in Columbus, Nebraska. Steve is passionate about investments, markets, business ventures, as well as property and real estate management. He may be reached at cptsl@columbusphysicaltherapy.com.