Negotiating Considerations for Letters of Intent 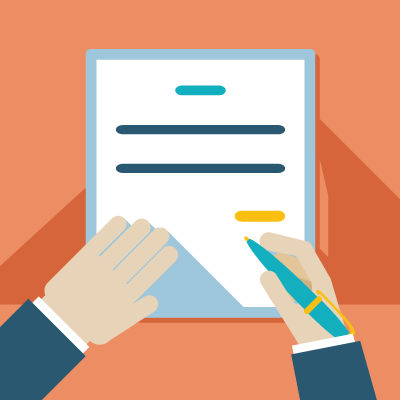 For anyone who spends even a moderate amount of time monitoring the private practice physical therapy marketplace, it is obvious that in recent years there has been a steady stream of business transactions. These transactions commonly include practice mergers and acquisitions, the establishment of joint ventures, the execution of service provider agreements, and other similar arrangements. Regardless of the specific transaction type, it is common that before the parties invest significant time and resources into a transaction that a Letter of Intent (LOI) will be negotiated and executed. For those not familiar with the term, a LOI, sometimes referred to as an Indication of Interest, Letter of Understanding, or other similar title, is a legal document that outlines the basic terms of a transaction and serves as a road map for drafting the definitive transaction documents.

While the specific contents of an LOI will differ based on the type of transaction, there are a number of common provisions that are negotiated in the LOI.

An LOI typically contains a broad confidentiality provision covering information exchanged by the parties during due diligence; the sharing of information with employees, agents, and advisors; and a requirement that the parties not disclose that they are in discussions regarding a possible transaction. From the perspective of both parties, it is typically mutually beneficial that the discussions remain strictly confidential. In reviewing an LOI, it is important to understand the breadth of the confidentiality obligations and to comply with the same. In addition, it is important to consider whether an initial freestanding confidentiality agreement or nondisclosure was entered into by the parties to the LOI and how that may or may not be affected by the execution of the LOI. 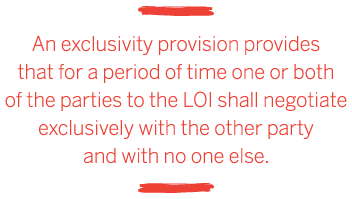 For those transactions that contemplate continued employment by one or more of the principals involved, the LOI will often contain key employment terms such as base compensation, bonus compensation, job titles, length of employment, and other material factors. If any type of severance package is included as part of the employment terms, it is commonly negotiated at least in part at the LOI stage. Finally, the LOI will often cover key employment issues such as health insurance benefits, continuing education allowances, and other items. 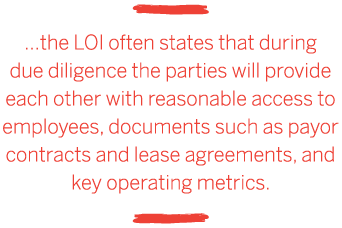 Typically, the majority of due diligence in connection with a transaction occurs between the signing of the LOI and the signing of the definitive transaction documents. The LOI often details certain elements of due diligence and sets forth parameters governing the due diligence process. For example, the LOI often states that during due diligence the parties will provide each other with reasonable access to employees, documents such as payor contracts and lease agreements, and key operating metrics. From a negotiation standpoint, it is important that the party disclosing information be comfortable with how access is provided and coordinated. For example, if a private practice is negotiating a service agreement with a hospital, the physical therapy practice may wish to interview certain employees of the hospital that it would potentially employ under the proposed transaction. Alternatively, the hospital may wish to keep the potential arrangement confidential as to its employees as long as reasonably possible. The LOI should be negotiated in a way to balance the interests of the parties and allow appropriate access under the specific circumstances.

6. Nonbinding Nature of the LOI.

The majority of letters of intent entered into involving physical therapy practices are nonbinding as to the business terms. This is due in part to the level of due diligence that has typically been completed prior to the execution of the LOI. For example, if a purchase price is included in the LOI, this is often based on a high-level financial overview and is established prior to the performance of extensive financial diligence by the purchasing party. As a result, it may not be appropriate to have certain financial terms legally binding upon execution of the LOI. While the majority of the business terms are nonbinding, other terms, such as exclusivity and confidentiality, are by their nature binding upon execution of the LOI. An LOI typically expressly distinguishes those provisions that are binding and nonbinding, and it is important when reviewing an LOI to understand the distinction. As a practical point, while the business terms of an LOI are generally not binding, it is important to give very careful consideration to the nonbinding terms. It is often counterproductive in the negotiation of definitive transaction documents when one party seeks to renegotiate the terms set forth in a previously executed LOI without well-reasoned justification.

When presented with a letter of intent, although each deal will have certain nuances, the practice owner should consider these key provisions and issues prior to executing such a document. 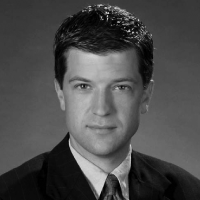