The 5 Offensive Formations of a Championship Social Media Strategy 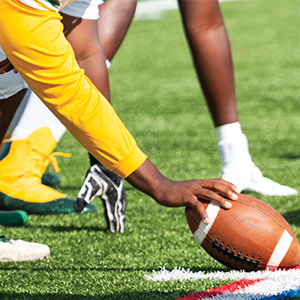 Football season is right around the corner, so what better time to hone your marketing playbook and prepare a championship-caliber offensive strategy for your social media efforts?

Like any good offensive strategy, the playbook below covers a wide range of styles and needs, and like any winning team, it’s important that you lean into your strengths while adding enough variety to keep people on their toes.

CALLS TO ACTION: “THE RUN UP THE MIDDLE”

The “Call to Action,” (CTA) is a vital part of any marketing campaign. After explaining why the audience needs your product or service, the CTA tells them how they can get it by taking a specific action, such as “Call now!” or “Schedule an appointment online,” etc.

Just as “up-the-gut” runs are a crucial old-school tactic for any offensive strategy in football, CTAs are absolutely necessary to marketing success. Similarly to those runs, though, when overused CTA can become predictable and begin to lose efficacy—even potentially losing you “yardage” by turning people off. The general rule of thumb for calls to action is the “80/20 rule,” which dictates that 80% of your messaging is interesting, valuable content, and only 20% involves a CTA. While you don’t have to keep stats on your content (we’ll leave that up to the eggheads in the fantasy leagues), it’s a good idea to generally be considerate of how much value your content brings to the audience, and how much is self-serving (CTAs tend to fall in the latter category). They may not look pretty, but when used correctly, CTAs can be an easy and effective way to get results.

“Social proof” is a marketing term for using the actions and opinions of people to influence others. Much like the short pass game, referred to as “dink and dunk,” social proof is a reliable play in your arsenal that, when done right, almost always has some level of success.

Examples of social proof on social media can include photos with written testimonials – either gathered from review services like Google, Yelp, or Facebook—video testimonials, and even bringing in “influencers” to promote your brand. While the Kardashians may be unavailable, recognizable local names such as business owners and community leaders can be a great resource for trustworthy promotion. It may be “dink and dunk,” but unlike CTAs, there’s almost never too much social proof.

Video content, statistically, is one of the best performing types of content you can produce right now; even videos made with incredibly low or no production values (editing, titles, etc.) tend to see great results. Like the deeper passes on the gridiron, these pieces often take a bit more time to develop and require more thought, effort and practice than usual to get right, but well-executed videos can “stretch the field” of your social media, increasing engagement, which helps to expand impressions and reach.

Every once in a while, you have to take a chance. A football team may throw a Hail Mary only a few times per season and in very specific (or desperate) circumstances. Likewise, desperation aside, there are situations where an opportunity or need arises for something big and bold. Examples of a Hail Mary in social media might include starting an account on a new, trendy platform, putting resources behind a series of new media content or putting a budget into new types of digital ads. Of course, if Hail Mary passes worked every time—or even 50% of the time—teams would run nothing else! Unfortunately, these big plays require a lot of thought, strategy, practice, and a little bit of luck, to get right, and even then, they sometimes fail. That’s why, similar to what happens on the field, you should only test out a few new platforms and media per year—otherwise you risk wasting your time and resources on efforts that don’t deliver, while wasting the opportunity to get results elsewhere.

OTHER PERSPECTIVES: “RUNNING BACK PASS”

Similarly, giving up the reins of your social media accounts involves a lot of trust, and certainly some coaching, before attempting it in the real game. Still, there are lots of benefits to having a regular rotation of capable physical therapists or other employees take control of your social media accounts for a day; if you’re an administrative marketing person, or even a clinic owner or director who deals mostly with business operations, your daily experiences will likely differ greatly from that of a treating clinician. Bringing an on-the-ground perspective and a fresh new (likely younger) voice to your social media presence can expand the potential for content and reach and open up opportunities you may not have considered. Just make sure they know the rules, have studied the playbook, and can throw the ball.