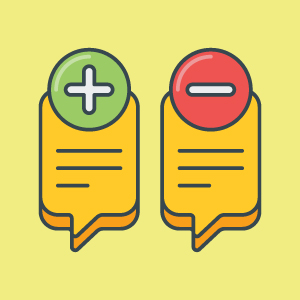 Be more constructive with your criticism.

As business owners and leaders, we need our employees to excel. It’s taken for granted that the best method to produce good results is through providing performance feedback based on an objective standard of excellence. But is excellence something that can be trained? What if the way we’ve been going about this actually inhibits rather than facilitates performance? In “The Feedback Fallacy” in Harvard Business Review, authors Marcus Buckingham and Ashley Goodall examine common assumptions surrounding employee feedback and then propose a different approach they claim is more effective.

Reading this article, I liked how the authors laid out a logical case. They asserted that when you critique someone, it activates that individual’s sympathetic nervous system, which shuts down creativity and growth. This highlights the problem with radical transparency or the “brutal truth”: The reviewer thinks she is sharing an objective, when she’s really giving criticism based on personal biases. The authors call this the theory of excellence. Because we cannot see our own biases, we therefore introduce error into the process. Buckingham and Goodall term this the idiosyncratic rater effect. When considering the cascading effect on raises and promotions, this systemic error can be long-lasting and damaging.

Their alternative is to provide a personal reaction to someone’s performance. This is best done while catching that person doing something well versus poorly. For example, instead of telling the receptionist, “You didn’t answer the phone in three rings,” you could notice that you felt he handled the walk-in client effectively. Because that person isn’t placed on the defensive, it allows the parasympathetic nervous system to come online. It subsequently allows the brain to engage in creativity. The result is the employee develops excellence built on strength, not weakness. I saw problems with this article. First, I would have liked to have seen citations for the research discussed, including the studies by Buckingham and Goodall themselves. If I wanted to know more, I had to purchase their book The Nine Lies About Work. Second, the authors stated that their proactive approach needs to be the first priority. In a health care setting, when a safety issue must be addressed, feedback is by nature criticism. Finally, it seems their approach would be easiest to implement for a new business versus from within a large institution with processes that are already entrenched.

Overall, “The Feedback Fallacy” was a refreshing take on what we’ve perhaps suspected all along: Creating excellence doesn’t come from a template. Rather, it develops from elevating the personal strengths of the individual.

Gina Kim, PT, DPT, PTA, is a recent graduate from the University of Findlay Weekend College Bridge Program. She can be reached at kimg@findlay.edu and @DptGkim.